G-Floats Are Now On Sale >
Liquid error: Computation results to '-Infinity'% OFF

CUSTOMIZE YOUR GMMK
Pre-Built options not what you are looking for? Build the GMMK to your exact specifications below. Recommended for advanced users.

* Note: Only the pre-built keyboards come with the secondary macros and hotkeys icons printed on them. Keycaps selected above will not have them.

Your build was successfully added to the cart!
View Cart Dampen the noise and adjust the feel of your MX switches. Compatible with RGB lights on your keyboard. Comes in various sizes to match your specific feel.

Start over
X
Question #1
!
We offer keyboards with and without the ten key number pad. Some gamers prefer to have a numpad, others prefer the compact size of the 'tenkeyless' version - the choice is yours!
Do you prefer to have a number pad on your keyboard?
Question #2
!
Whether you're a seasoned pro, or the newbiest of mechanical keyboard users, we offer both fully customizable and pre-built models to fit your needs.
Do you have experience with mechanical keyboards?
Question #3
!
With our customized version you'll install the switches and keycaps before using. Our revolutionary modular design makes this process quick & easy - your board can be ready to go in only about 20 minutes!
Do you want your keyboard 'ready to go' out of the box, or are you okay with installing your own switches and keycaps?
We recommend:
Glorious Modular Mechanical BRN Keyboard
Pre-Built with Brown Switches
+ Full modular, mechanical keys
+ LED Backlighting
+ Easy Access Hot-Keys
+ Sandblasted Aluminum Faceplate
+ Raised Keys, Minimalist design

Ever wonder what Gateron Blues felt like? Or what is the craze behind the Cherry MX clears? Want to use Gateron Reds for your WASD, but Gateron Blacks for all your other keys? With the GMMK, you no longer have to purchase an entire new keyboard, or disassemble and solder your switches – you can simply pop out the switch just like a keycap, and mix/match to test out and use any combination of switches you desire.

This is the last keyboard you will ever need to buy. < 5 seconds to replace a switch
Easily remove keycaps & switches for your entire keyboard. Use any combo and brand of a compatible MX switch. Choose the switch that you want
We offer several different MX switches to pick from. Each switch has its own unique feel, sound, and experience. Macros & Hotkeys
Create and assign macros to any key with our GMMK software. Secondary icons printed on only pre-built keyboards. Discreet LED indicators
Soft Nums/Caps/Scroll lock lighting that is easy on the eyes. Artisan ESC keys
Comes with an alternative ESC key if you prefer a uniform look. The GMMK is designed to work the following switch brands: Cherry, Gateron, Kailh. We currently sell Gateron and Kailh GMMK-compatible switches on our website.

Although other brands of switches besides Cherry/Gateron/Kailh will fit, they may be loose or have a tighter fit than normal.

There are several types of Cherry/Gateron/Kailh switches available. These are the specific requirements for the type of switches that are compatible

OTHER TYPES OF CONFIRMED WORKING SWITCHES:

VIDEO OF HOW TO SWAP SWITCHES ON THE GMMK

How long does it take to assemble the Barebones version and do I need any tools?

What is the difference between the Barebone and the Pre-Built version of keyboard?

Where can I buy compatible switches?

Does the GMMK come with any pre-installed switches/keycaps?

Does the GMMK come with any pre-installed stabilizers?

Yes, all our boards come pre-installed with stabilizers.

Can I use any combination of switches?

Can I swap switches while the keyboard is powered on?

Can LED's be disabled?

How hard is it to replace/swap out switches?

Is there a standard bottom row? Can I use other keycap sets?

Can I use a non-LED switch with this keyboard?

Is the USB cable detachable?

Is the backlight RGB? Gateron Black
Ideal for: Gaming and Typing
If Red is too light, then this is your best bet. Still smooth, but requires more force to press down.
LinearSilentHeavy Weight Gateron Green
Ideal for: Gaming and Typing
The heaviest switch available. For those who love the click and clack of a keyboard. Generates a loud click and tactile bump when a key is pressed. Popular for typing and programmers.
ClickyloudHeavy Kailh Box Black
Ideal for: Gaming and Typing
If Red is too light, then this is your best bet. Still smooth, but requires more force to press down
LinearSilentHeavy weight Kailh Box Brown
Ideal for: Gaming and Typing
The heaviest switch available. For those who love the click and clack of a keyboard. Generates a loud click and tactile bump when a key is pressed. Popular for typing and programmers.
TactileNon ClickyMedium WeightLow volume Gateron Red
Ideal for: Gaming
The ideal and most common switch preferred by gamers. Smooth as butter, allowing rapid execution of the keys.
LinearSilentMedium weight Gateron Blue
Ideal for: Typing
For those who love the click and clack of a keyboard. Generates a loud click and tactile bump when a key is pressed. Popular for typing and programmers. Note: clacking will annoy your peers
ClickyLoud Gateron Brown
Ideal for: Gaming and Typing
A hybrid between Linear and Clicky switches. Does not generate a click when pressed, but the tactile bump is still present. Ideal for those who want a tactile bump and work around peers.
Tactilenon clickylow volume Kailh Box White
Ideal for: Typing
Generates a loud click and tactile bump when a key is pressed.
Clickyloud Kailh Purple
Ideal for: Gaming and Typing
Similar to the Brown, but the tactile bump comes much earlier. A favorite amongst the mechanical keyboard elitists.
TactileNon ClickyMedium weightLow Volume
Still Confused? Get our MX Switch Sample Pack and try them all!

This keyboard is pretty nice, I have the gateron blacks on the tkl and it's very smooth. The new tkl does have Usb type c in which I am very happy about it.

I bought the full size and have been mostly happy with it. At this price point, the stabilizers should've been better though - I clipped and lubed them but they still made an unbearably loud clack.. especially the space bar. It also should have a detachable cord which even a cheaper no name brand KB I purchased off of Amazon came with.

After swapping in some better stabilizers now the board is much better. For most gamers this won't be an issue, but it was noticeable for me as this was delegated to work/office duty now since I've moved on to customs.

s
s.(.
Such an incredible board

After a year of debate I finally snagged the GMMK compact and boy howdy. This thing is a tank. Super solid and the switches fit in so easily. Added a set of Glorious white keycaps to make this thing really pop and its my favorite board (including 2 customs )

i hot the bare bones tkl and it turns out that it has a usbc port instead of a micro usb which id great.

Can confirm the newest tkl batch does have usb c which made me very excited! My first hotswap keyboard and lubing switches I couldn't be happier. Went with kailh pro purple switches and its so much better than my previous huntsman te. Highly recommend for anyone looking into getting into diy keyboards. 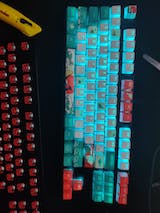